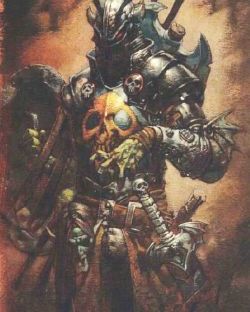 Recently I was reading a Greyhawk forum when I discovered an article by Mike Bridges, Knighthoods of Greyhawk, that introduced me to a character I had never encountered before: Sir Kargoth, Greyhawk’s first Death Knight. My interest being piqued I began researching this fascinating character.

In the fall of 1983 an article appeared in DRAGON Magazine #79, Setting Saintly Standards, Friends of the Gods Deserve Special Powers, by Scott Bennie[1] that would introduce the world to a homebrewed Death Knight, Sir Kargoth, and would become the foundation for Greyhawk’s Death Knights.

At this early point in Sir Kargoth’s development he was known as the “King of the Death Knights” and was an example of the “anti-saint” that Scott Bennie advocated for use with the Advanced Dungeons & DRAGONs (AD&D 1e) game. The character is a generic, though striking, villain. His history is reminiscent of other villains of the time:

Kargoth was a great paladin, until he unleashed a demonic terror on the Prime Material Plane in a mad bargain for personal power. The grateful demon prince transformed Kargoth into the first and most powerful Death Knight. When the forces of good rallied and drove away the horror, Kargoth exalted in his newly won power and performed many deeds of great malevolence and harm to the forces of good . . .”

There are hallmarks similar to those of Iuz, the Old One, who waged war on Oerth with an army of men, orcs, and fiends; but Sir Kargoth distinguishes himself from Iuz by both his enemies and his own powers. Unlike Iuz, who’s enemies are a veritable who’s who of the world of Oerth, Sir Kargoth at this point only has two enemies that are named: Sir Bane, who opposes all undead[2]; and Hainard of the Whiteguard, who battled Sir Kargoth and took from him his magical sword Gorgorin the Shatterer[3].

. . . While he serves Demogorgon willingly, his power is believed to approach that of his master’s, and his actions in the complex rivalries of the Abyss require close scrutiny . . .”

Demogorgon, the Demon Prince, is arguably more powerful than the demigod Iuz, and certainly his statistics found in the Monster Manual suggest that he is[5]. For Sir Kargoth to be nearly as powerful as the Demon Prince creates a situation where a villain within placed in the game world is an earth-shattering threat.

November, 2000 saw Sir Kargoth make his first appearance in 17 years as he appeared in the Living Greyhawk Gazetteer:

. . . Few events shook the order as greatly as the betrayal of the paladin Sir Kargoth, who made a pact with the forces of evil and unleashed a demonic terror upon the Great Kingdom in 203 CY. The abomination was destroyed at great cost, but the fallen knight seduced no fewer than thirteen members of the order to his dark banner. Kargoth’s treachery cursed everything he touched, and sunlight turned all fourteen traitors into the first and most powerful of the so called death knights . . .”

In the second article, Demogorgon’s Champions, Gary Holian would take the groundwork he established in the first article to develop the 14 Champions of Demogorgon: the Death Knights. Here Sir Kargoth, King of the Death Knights, became Saint Kargoth the Betrayer.

The Death Knights as Holian envisions them are the stuff of legend:

. . . [T]hese beings are more than 400 years old and are very powerful, experienced adversaries, easily the match of any elder vampire or lich. Their legend is a powerful force in the Great Kingdom and was exploited even by Overking Ivid V and his former court wizard, Xaene, and their creation of Knights of Doom, a pale mockery meant to evoke these ancient villains to frighten the populace . . .”

Saint Kargoth and his accomplices are the boogie men of the Great Kingdom and their names impact that corner of the world and any region where they have called home. Joining Saint Kargoth as Death Knights are: Lord Monduiz Dephaar, Lady Lorana Kath of Naelax, Prince Myrhal of Rax, Sir Maeril of Naelax, Lord Andromansis of Garasteth, Sir Oslan Knarren, Sir Rezinar of Haxx, Lord Thyrian of Naelax, Sir Minar Syrric of Darmen, Duke Urkar Grasz of Torquann, Sir Luren the Boar of Torquann, and Lord Khayven of Rax. A fourteenth Death Knight, Sir Farian, once existed but was destroyed by Saint Benedor at the battle of Delaric.

Saint Kargoth would not appear again in publication until April, 2003 when he appeared in the article Paladins of Greyhawk Holy Warriors of the Flanaess, by Gary Holian. Here we learn that Murlynd, the White Paladin, and Saint Kargoth are opposed to each other:

. . . Murylnd is currently engaged in a contretemps with the fiendish Saint Kargoth over a weapon known as the Quannon,[8] which has drawn him away from Oerth for a time . . .”

Up until this point all the information about Saint Kargoth existed in the quasi-official nature of all DRAGON articles prior to issue #309 and all of the Living Greyhawk material. These articles were treated as options that players could choose to add to their games but were not necessarily cannon to the worlds of D&D. In other words, Saint Kargoth exists within our lexicon of the game world, but his existence is not officially recognized by Wizards of the Coast – until the Fiendish Codex I: Hordes of the Abyss was published in 2006. It’s here that Kargoth appears for the first time in an official D&D book:

. . . A stone fortress perched high atop this rocky pinnacle houses one of Demogorgon’s most formidable champions, Saint Kargoth the Betrayer . . . the corrupted human paladin whom Demogorgon made the first death knight. Kargoth’s terrestrial concerns on the Material Plane often keep his attention from the Gaping Maw . . .”

Here Kargoth’s position as the first Death Knight in all of the D&D worlds is again established as are his connections to Demogorgon. He’s not tied exclusively to Greyhawk as Holian attempted to do in his articles but he’s officially now a part of the D&D lexicon beyond the confines of DRAGON and Living Greyhawk.

We would not see Saint Kargoth again in print until the final issue of DUNGEON Magazine #150, published in September 2007, when he appeared in the Savage Tide adventure path. No new information is presented about the Death Knight in that article.

While Scott Bennie created Saint Kargoth it’s clear that without the efforts of Gary Holian that the character would have been a footnote in the history of the game, appearing a single time, and then forgotten about. Holian made the character special by devoting his time to fleshing out the Death Knight, his companions, and by grounding him in the world of Greyhawk. As a result we have been given a villain that can be used to form a long term adversary for our adventurers whose defeat is far from certain.

[1] At the time Scott Bennie was still attempting to get his foot in the door at TSR after first being published in DRAGON Magazine #52 in August, 1981 (see WANTED: I: NOT A VERY NICE GUY on pgs 56-57 for more). Setting Saintly Standards, Friends of the Gods Deserve Special Powers would be his third article published by TSR during this period and drew heavily on his home campaign. He would later recall this period of his writing development for role-playing games in the following manner: “. . . I kept writing for DRAGON, but I wasn’t good enough to make consistent sale for about three more years. But I kept at it, and Bruce Heard eventually commissioned anthology pieces and finally full modules from me . . .” (badastroza).

[2] I believe that this is the only article to ever feature Sir Bane. If anyone has any additional note on him I would be greatly interested in reading them so that I can flesh out this character.

[3] Hainard of the Whiteguard appears only as a footnote to Sir Kargoth and never appears again in an official resource on the world of Greyhawk in any other manner. If anyone has any additional notes on him I would love to read them.

[6] Gary Holian’s name is a familiar one for many Greyhawk enthusiasts as he has helped shape the setting in both the semi-official and unofficial channels. He’s been featured in DRAGON Magazine, helped write the Living Greyhawk Gazetteer, and ran Greytalk and Canonfire!.  His creativity has helped push the setting in new and exciting directions since the launch of D&D 3e in 2000.

[8] Other than the name Quannon I’ve been unable to find any more information about this weapon. I’m unsure of its make, its powers, or even where it came from. If anyone has any additional information on the item I would greatly appreciate learning more about it.

Stark, Ed with James Jacobs and Erik Mona. Fiendish Codex I: Hordes of the Abyss Wizards of the Coast, 2006. pg. 141

This site uses Akismet to reduce spam. Learn how your comment data is processed.

THE WORDS, THEY SPEAK

Find Things You Didn’t Know You Were Missing!